Like coal and oil, propane is a fossil fuel.  Liquid Petroleum Gas, LPG (commonly called propane), is a liquid mixture made up of at least 90% methane, 2.5% butane and higher hydrocarbons, with a remaining balance of ethane and propylene.  Propane is a by-product of natural gas processing and petroleum refining.  Propane is separated from the natural gas mixture, and most of it is sent through a pipeline system to bulk storage facilities across the nation.  What isn’t shipped through the pipeline system is either transported by truck, rail car or barge.  From those bulk storage facilities the propane is delivered the customer homes in specially designed fuel trucks called “bobtails”.  The propane is then pumped out of the bobtail into the customers “specially designed storage tank” waiting for fuel consumption .  The transportation and storage of propane is regulated, for your safety as well as others, by strict Federal Government hazardous material standards.

Today, new safety features on propane fired appliances makes them safer than ever before.  Such new features include temperature sensitive shut-off systems on furnaces.  Oxygen depletion sensors that shut off unvented heating units should the oxygen level in the room being heated drops to an unsafe level.

For your safety and others, the Greater Dickson Gas Authority is constantly keeping abreast of the safety standards and training aspects of the handling of propane gas.  We have qualified and trained personnel to deliver and work on your propane systems if need be.   Like natural gas or any other fuel source on the market today, we think propane gas, is a safe energy source as long as its treated and handled like any other energy source…With Respect!

In the early 1900’s, gasoline used for automobiles was difficult to handle.  Due to inadequate refining techniques, the gasoline would quickly evaporate or “weather away” while it was in storage.  Under the direction of Dr. Walter Snelling, the U.S. Bureau of Mines began experiments to stabilize gasoline.  Through these experiments, Dr. Snelling discovered that the gases which evaporated could be condensed and stored as a liquid at moderate temperatures and pressures.  By 1911, Dr. Snelling had isolated and identified these gases as propane and butane, the two major components of LP-gasses.  In 1912, propane gas was used for cooking food in the home.  The first car powered by propane ran in 1913, and by 1915 propane was being used in torches to cut through metal.  When Dr. Snelling sold his propane patent to Frank Phillips, the founder of Phillips Petroleum Company, his price was $50,000.  Today, propane gas is an $8 billion industry in the United States alone and it is still growing. 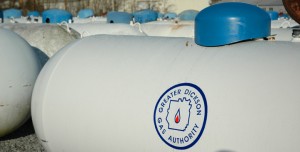 Please feel free to contact us with any questions or concerns.